Book: The Custodian of Paradise 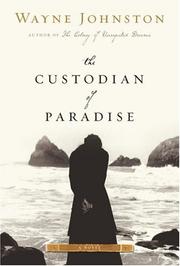 The Custodian of Paradise

At the beginning of the novel, Fielding -— advancing on middle age, hobbled by disfigurement and personal demons —- is headed for Loreburn, a deserted island off the south coast of Newfoundland. She has chosen the island after an extensive search through census records, which confirmed that it once had a small town of which only boarded-up houses remain; it is now home to not a single soul. Fielding has no idea what to expect of Loreburn, yet she brings two enormous trunks with her and plans for an extended stay.

Gradually, we learn what has brought her to this wild island. As Fielding revisits her articles, letters and journals, we are swept up in her tumultuous life’s journey and the mystery of this Provider’s identity. From the downtrodden streets of New York’s immigrant neighbourhoods to the sanatorium where she fights TB, from the remote workers’ shacks of the Bonavista rail line to the underbelly of wartime St. John’s, the Provider seems to have devoted himself to charting Fielding’s every move and to sending her maddeningly cryptic letters about his role in her life. Yet he has also protected her at times, and their correspondence, as it develops, becomes a form of sustenance for Fielding. While she fears that he may have followed her to Loreburn, she fears even more that he may not be able to find her there.