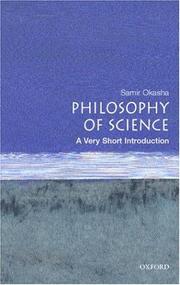 Beginning with a short history of science to set the scene, Samir Okasha goes on to investigate the nature of scientific reasoning, scientific explanation, revolutions in science, and theories such as realism and anti-realism. He also looks at philosophical issues in particular sciences, including the problem of classification in biology, and the nature of space and time in physics. The final chapter touches on the conflicts between science and religion, and explores whether science is ultimately a good thing.