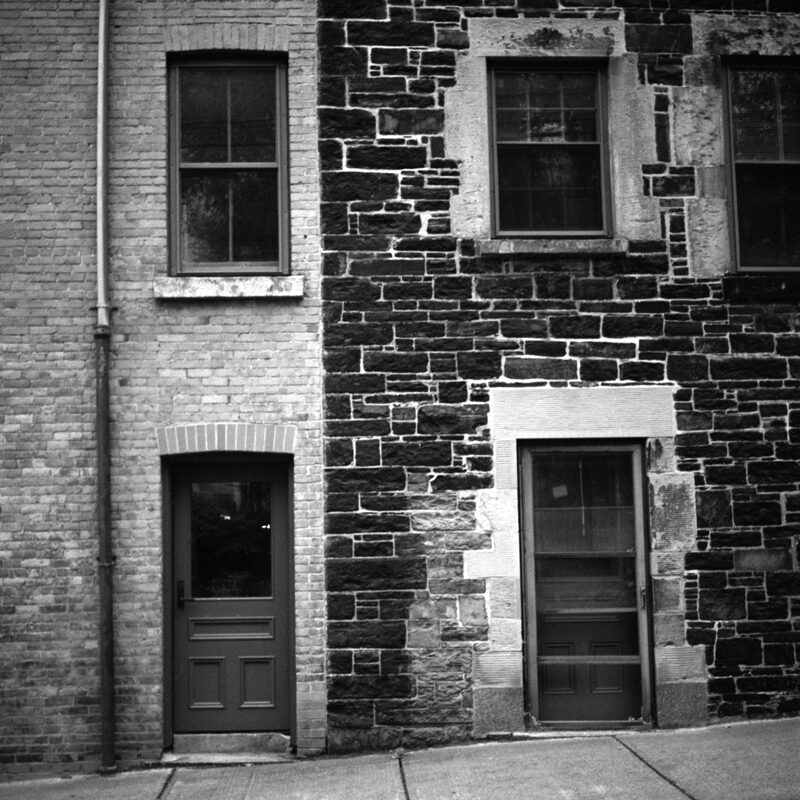 This is the north exterior wall of Stoddard House, located at 1359 Barrington Street on the corner of Bishop Street. It was built in 1828 and is a registered historical property in Halifax. The plaque on the side calls it Old Presbyterian Manse, but since it’s listed in the registry as Stoddard House, that’s what I’m going to call it. It’s now the home of the Nova Scotia Association of Architects.

At one point it has been said that Lucy Maud Montgomery lived on the top floor while she was studying English Literature at Dalhousie University in 1895-1896. I can’t find any real proof of that though. It’s also said that a ghost haunts the building — most of Halifax claims to be haunted in one way or another — the result of a botched abortion during the time the building was a doctor’s office. The cries of a baby have been heard on the second floor, where the surgery was located. There’s also a cornerstone — just outside the right side of the frame of this photo — with the old name of Bishop Street carved into it (Wallace Street) and either the business end of a cannon or a plain old iron bollard sticking out of the ground near the front steps. There are also quite a few people in the Halifax Explosion Book of Remembrance that lived at this address, though it seems too far south for them to have died in the house. They don’t build them like this anymore; then again 185 years is plenty of time to gather some personality.

I like the stone of the original building of course, and I like the contrast between it and the newer brick on the back half of the building. Add in the doors and windows and all those lines, it’s an easy shot in black and white. I walk by this corner twice a day, five times a week on my walk to and from work. Buildings like this are just one reason why I love my neighbourhood so much.