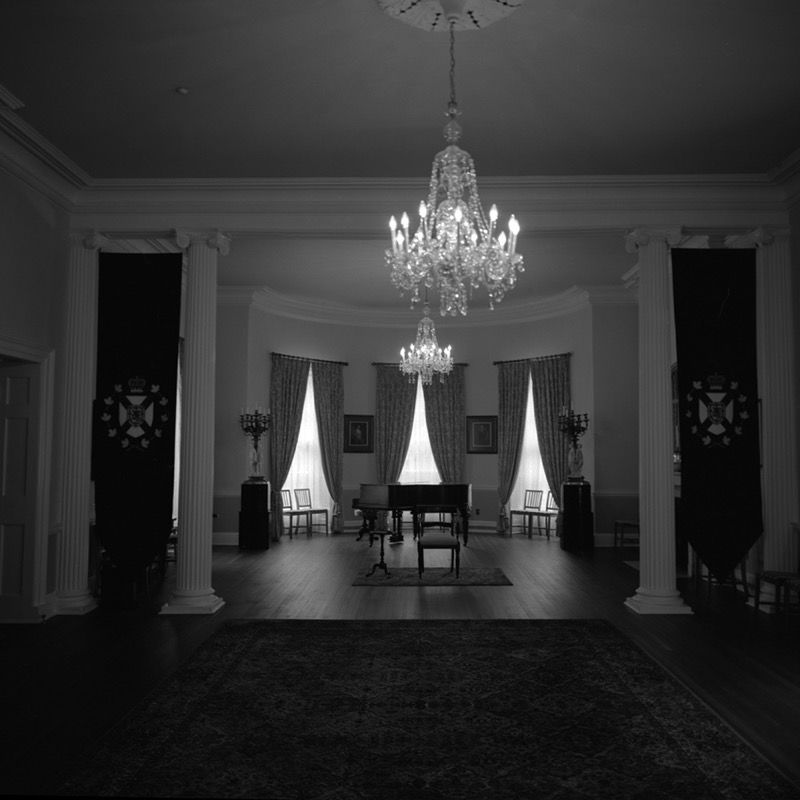 This is the ballroom of Government House, the residence of the Sovereign’s representative in Nova Scotia. It was originally built in the late 18th century, continuing to stand today on a nice spot in downtown Halifax. I got a chance to get a tour of the residence this spring when it was opened to the public during Doors Open Halifax 2013. SInce my mom was visiting and was eager to get a look inside, it was the perfect opportunity to bring the camera and get a few photos of the interior.

Since I live a block away from Government House, it’s part of my neighbourhood — now known as Historic Irishtown — so I’ve walked past it thousands of times on my way to and from work and other places. I see it every day but up until this year I had never been inside. It was most definitely worth standing in line for as the tours given were extended from the usual; we got to go up to the second floor and wander through the Queen’s quarters, an area typically off-limits. I found it to be remarkably modest for a royal figure, I was expecting golden everything.

This photo was taken in the ballroom, located on the main floor of the residence, off to the left when entering from the front. It’s a lovely room with beautiful hardwood floors, columns, and large windows. We were told it is still used for music and dancing and as with so many historical buildings you can almost hear the music and see the sweeping dresses of Victorian ladies. The ballroom was used as a command post during the Halifax Explosion of 1917 and has hosted many royal visitors and international dignitaries.

To get this photo I had to wait behind patiently as our tour group made its way out at the other end of the room and shoot before the next group came in. There was only a very quick moment to act!