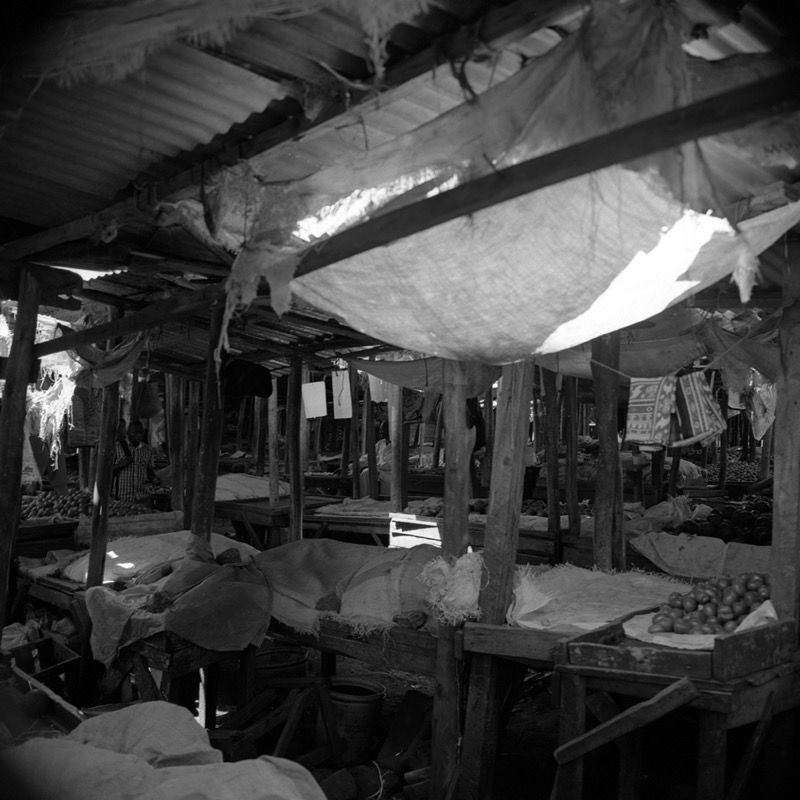 While I was in Tanzania my friend and I had a couple of days before the trek up Kilimanjaro to do a little exploring. We decided to hire a local guide and go into Moshi town to check out the hustle and bustle, check out a market or two and generally see what the place was all about.

Our guide Emmanuel was from the area so he was completely comfortable showing us around, even the dark corners like this market. If you look on the maps of Moshi you’ll see that there’s only one market marked. That’s the big, covered market in the middle of town that you can find some photos of around the web. It’s generally safe for tourists to go to and there’s lots to see (and smell). What aren’t marked are the two smaller markets. There’s the uncovered market that the locals use along Manyema Street where there’s anything and everything for sale. For the sensitive eyes and nose of a North American, it was a bit of an eye and nostril opener. The third market is a dark, covered affair that may not be the best place to go if you don’t have a guide. It too was meant for locals — it looked like we were the only foreigners anywhere near the place — and is like a dark, smelly maze.

Emmanuel kept telling us it was alright to take pictures wherever we went which was cool, but I was looking for non-touristy shots. There are lots of photos of Moshi around the web and I didn’t want to duplicate them. I was very happy we got to see places like this market as it’s totally off the beaten path in Moshi town, and I’m quite confident this is one of very few photos of this place. That’s not the goal, but it’s still kinda neat. My only complaint is that I wish I had some faster film in my camera so I could increase the depth-of-field, but it was super bright outside so I did what I could with the slower film I was using. As it is, I like the darkness and mystery of the photo, it feels just like it did being there. Imagine what it would be like in there during rainy season. Loud and lots of leaks.