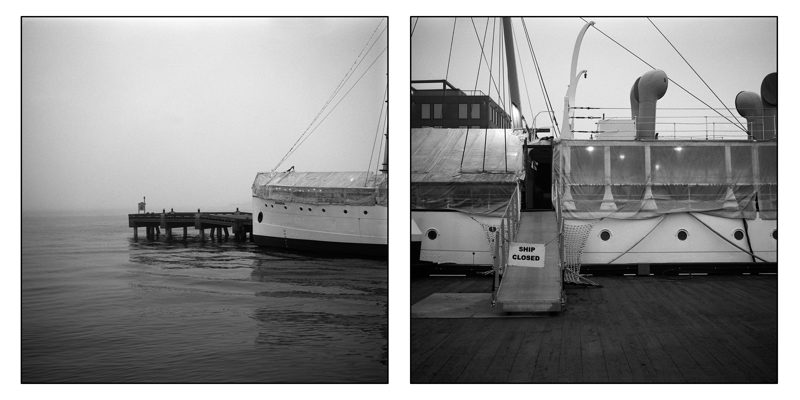 As new films come on the market I’ve been trying some of them. This particular film is another re-spooled motion-picture film and has been a film I’ve been meaning to try for a while. I actually bought four rolls early last summer but because of my flooded apartment I didn’t have any of my film developing equipment available so couldn’t really do much with it.

I’ve been walking to work more often now that the latest Covid wave has subsided a little but of course it’s the middle of winter and my inspiration dries up when the temperature turn below -10 and the skies seem endlessly grey. I forced myself to load a film last month and didn’t get too far with it but last week I happened to have my camera with me when the temperature turned reasonable for a single day.

Of course that also meant the fog was very thick, but I thought to hell with it, it’s time to take some photos. I walked home from the office along the harbourfront which is very quiet and deserted this time of year and managed to finish the roll. The CSS Acadia was moored in its usual spot and looked good against the fog. I don’t make diptychs too often but I thought these two frames worked well together.

The film turned out a little grainier than I was expecting but I think that is down to my developing methods. I have three more rolls in the fridge to experiment with and I think with at least one of them I am going to try HC-110 semi-stand. I’ve had good results using that developing method and am curious to see how this film turns out using it.