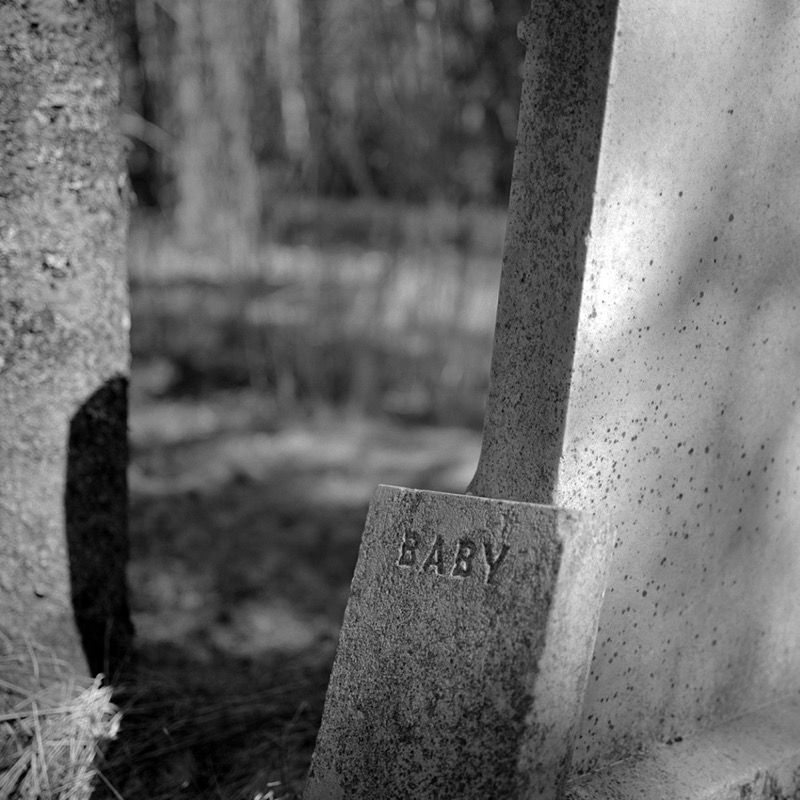 When I lived out west near gold-rush country I used to find a ghost town in just about any direction. I’d be out in the middle of nowhere and find the creepiest things. Heck, I’ve even spent the night all by myself in a ghost town. Creepy. So now that I live on the east coast where there’s a slightly longer history, I was hoping to find some interesting abandoned towns here. I haven’t been too successful with that mission, but since I’m new around here, perhaps I’m not looking hard enough.

I did manage to find Roxbury though. Wasn’t hard as it’s right there on page 76 of the Hiking Trails of Nova Scotia book. It’s a bit of a hike to get in and back if you’re not an ATV — about 17km round-trip — and the trail can be a bit muddy in the spring and fall, but that’s what a good pair of boots are for. Normally I’d just do this sort of thing by myself — there isn’t anyone lined up at my door to hike 17km in the mud, surprisingly — but I recruited a co-worker to make the journey. So, off we went down the old road.

We made our way all the way to Roxbury, and to the end of the “road” at Pleasant Lake, quite a beautiful spot. I can see why people lived here. Unfortunately, there’s not a lot left of the old town. The most notable features are the stone fence/walls that line the road for a good stretch. They’re a little creepy because you know they’re man-made, but they’re sufficiently old and grown over to appear like they’re there naturally. There are also open wells in the woods, so if you decide to go off-trail, make sure to keep your eyes glued to the ground. We came across one in what appeared to be an old yard, and though it wasn’t super deep, you wouldn’t want to fall in.

If you stick to the road you won’t see a whole lot, but if you do a little bushwhacking you can find what look to be old stone foundations and root cellars. Same kind of weirdness as the man-made-but-grown-over feeling of the stone walls. But the best thing about making the hike to Roxbury is the cemetery. To find the cemetery you need to take a side trail off the main road and hike about 200m over some fallen trees and around some bends. Nothing provides a connection to generations gone like a cemetery. The stone walls and foundations are neat, but there’s no sign of people. See a headstone sticking out of the ground in the middle of the forest and it’s an immediate holy crap people really did live here a hundred years ago feeling.

The cemetery is small and unkept but insanely interesting. There are only a few stones, the oldest dating back to the mid-19th century. It’s a mixture of fascination and sadness for me to find a place like this. It just feels so utterly forgotten. The point of putting up headstones is to be remembered and these folks are so off the beaten track and seemingly uncared for it doesn’t quite feel right. Then again I should stop being so sentimental.

It doesn’t help the sentiment-reducing part of my brain to see a headstone like this one. One that just says “BABY”. A small, unadorned stone with a simple, almost cold inscription. When we came upon the cemetery a few of the stones had been moved and placed upright on trees, or in this case, another headstone. It was late afternoon and the sun had come around and was getting low. I love this kind of light. As I kneeled next to this stone, all sorts of stories and thoughts racing around in my head, the letters on the stone magically darkened. Alright I know, direct light plus surface depth equals shadow, but from the angle I was at I couldn’t read the inscription. Then, for just a moment, there it was.