Book: It Feels So Good When I Stop 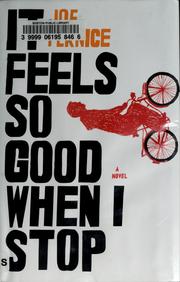 It Feels So Good When I Stop

From the first moment he met Jocelyn, he knew he would marry her or destroy his life trying. He didn’t count on being the lucky bastard that got to do both.

It’s October 1996 in Cape Cod. Our hero- a narrator so ordinary that he remains nameless -is a talented but floundering musician-turnedwaiter who has hightailed it out of a volatile day-old marriage in New York and further into his own ever-deepening mess. With no job, no apartment, no wife, and a six pack of beer, he’s looking for a clean slate. For years he’s been dodging life’s extremes, stuck somewhere between responsibility and freedom, love and obsession, obligation and desire, apathy and success. Now he’s seeking sanctuary at the home that his sister abandoned, along with her marriage, so that he can sort out something in his life-what, he’s not quite sure.

Looking for distraction from his memories of the hot-blooded Jocelyn, who is still refusing to return his calls, he agrees to look after his two-year-old nephew. Together, the unlikely pair catches the attention of Marie, a young woman in the neighborhood with a troubled past of her own. As they get to know each other, our hero ventures into unknown territory, where his affection for a damaged kindred spirit just might shock him awake and shake him to the core.