Book: The Sweetness at the Bottom of the Pie (Flavia de Luce, #1) 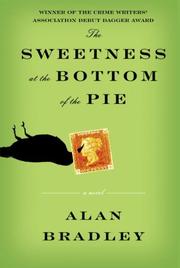 The Sweetness at the Bottom of the Pie (Flavia de Luce, #1)

The summer of 1950 hasn’t offered up anything out of the ordinary for eleven-year-old Flavia de Luce: bicycle explorations around the village, keeping tabs on her neighbours, relentless battles with her older sisters, Ophelia and Daphne, and brewing up poisonous concoctions while plotting revenge in their home’s abandoned Victorian chemistry lab, which Flavia has claimed for her own.

But then a series of mysterious events gets Flavia’s attention: A dead bird is found on the doormat, a postage stamp bizarrely pinned to its beak. A mysterious late-night visitor argues with her aloof father, Colonel de Luce, behind closed doors. And in the early morning Flavia finds a red-headed stranger lying in the cucumber patch and watches him take his dying breath. For Flavia, the summer begins in earnest when murder comes to Buckshaw: “I wish I could say I was afraid, but I wasn’t. Quite the contrary. This was by far the most interesting thing that had ever happened to me in my entire life.”