Book: The Cure for Death by Lightning 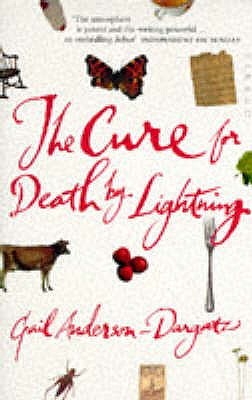 The Cure for Death by Lightning

The Cure for Death by Lightning takes place in the poor, isolated farming community of Turtle Valley, British Columbia, in the shadow of the Second World War. The fifteenth summer of Beth Weeks’s life is full of strange happenings: a classmate is mauled to death; children go missing on the nearby reserve; an unseen predator pursues Beth. She is surrounded by unusual characters, including Nora, the sensual half-Native girl whose friendship provides refuge; Filthy Billy, the hired hand with Tourette’s Syndrome; and Nora’s mother, who has a man’s voice and an extra little finger. Then there’s the darkness within her own family: her domineering, shell-shocked father has fits of madness, and her mother frequently talks to the dead. Beth, meanwhile, must wrestle with her newfound sexuality in a harsh world where nylons, perfume and affection have no place. Then, in a violent storm, she is struck by lightning in her arm, and nothing is quite the same again. She decides to explore the dangers of the bush.