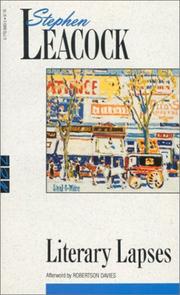 By Stephen Leacock with Robertson Davies
Published in 1989 by New Canadian Library
Originally published in 1910
Rating: 3 / 5

The humour, irony, and wit of Stephen Leacock have never been shown to better advantage than in Literary Lapses, his first collection of comic writings. Within its pages are such classic stories as the man who is seized by fear as he opens a bank account; the awful case of the young man who dies because he cannot tell a lie; the astonishing tale of the baby who ate thirteen Christmas dinners, and many other tales that have become part of the world’s comic literature.

When Literary Lapses first appeared in 1910, it was an instant critical and popular success.