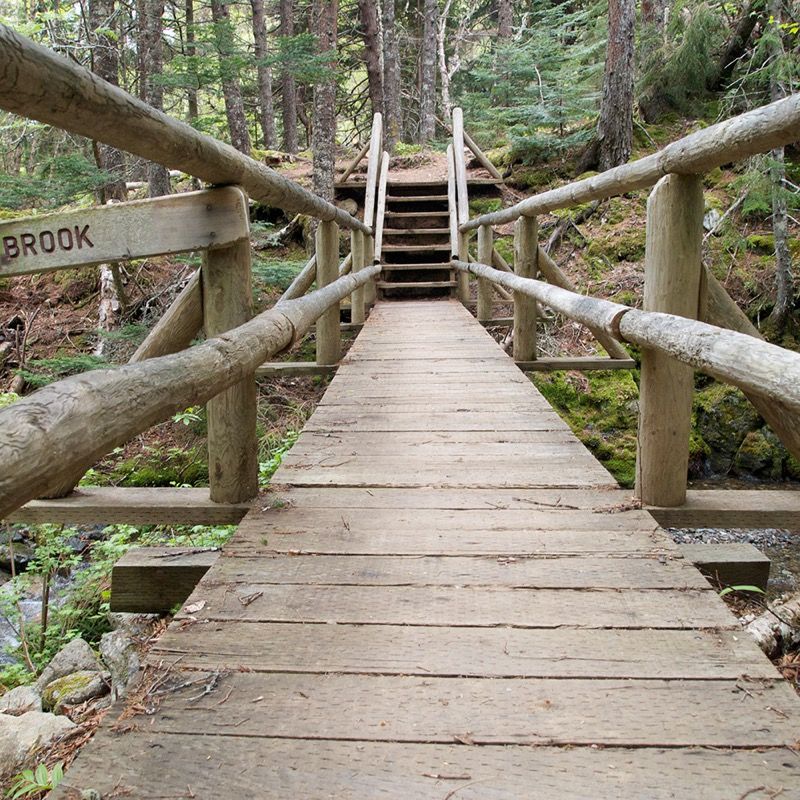 Since moving to the east coast, I’ve been trying my best to do as much hiking as I did when I lived in central British Columbia. One of the trails that caught my eye was the Cape Chignecto trail, a 50km loop around Chignecto Head, in the Bay of Fundy. It intrigued me because not only was the scenery beautiful, it was also a decent length and had challenging terrain. I’ve been thinking about doing the trail for a few years, and this year I finally convinced another crazy person to come with me.

So, just three days after returning from a four day trip to Keji, my friend and I packed up our backpacks, got up early on a Thursday morning, drove a couple of hours to Advocate Harbour and started the first leg of our trip, a 12km section of the trail ending at Refugee Cove.

The trail to Refugee Cove is beautiful. Many people will tell you it’s really hard, but I think the second leg — along the west coast of the cape — is much harder, but we’ll get to that later. The day was comfortably warm and sunny. We stopped for a rest halfway, at Mill Brook, for a drink and a snack and to take a few snaps.

Past Mill Brook the trail goes in and out of some pretty cool areas, I’ll call them maple meadows, as seen in the photo.

They were beautiful and so nice to hike through with the sun shining so brightly and a cooling breeze lightly blowing. Along the way we came across a small black bear who was too busy chowing down on grass and digging up roots to even notice us. It was great to see a little wildlife. There were lots of signs of bear activity along the trail so it wasn’t a big surprise to come across one eventually. Before long, we found ourselves at Refugee Cove, in time to setup camp, make some yummy supper and head to the beach for a few photos. The sunset was gorgeous, both over the bay and the hills:

Lucky for us, there were some posts leaning very photogenically in the water. The tide was coming in, and on the Bay of Fundy it moves fast, so I was lucky to get this shot. Not ten minutes later the posts were almost completely submerged.

Day two brought cloudy skies but the rain stayed away thankfully. We were feeling optimistic as the guy who was at the visitor’s centre when we registered told us that after the first day, the second would be, and I quote, “a walk in the park”. Well, he lied. The second day was one of the most brutal, punishing hikes I’ve ever completed, including the hikes I’ve done in the Rockies and the Yukon. Not only was it longer than the first day at 16 kilometres, it was a constant up and down. The trail would go down to sea level, 0, and rise up to over 200 vertical metres in a short horizontal distance. The last climb of the day was perhaps the worst, going from 0 to over 200 vertical metres in about 600 horizontal metres. I’ll let you do the math on the slope. It was awful, especially since we were hoping to just have a moderately difficult day on the trail. It wasn’t too long after we set out that morning, at the point we got right to the tip of Cape Chignecto, that I realized the soles of my boots had split. The left boot wasn’t too bad, but the right boot had come almost completely apart. You can see a photo at the end of this post. I can tell you that broken boots made the day even worse.

By the time we got to our campsite at Seal Cove, about 7:30 in the evening, we were too exhausted to even cook supper. My feet were completely soaked — did I mention this was also the wettest section of the trail? — and sore from walking with a 45 pound pack in what were basically flip-flops. It was cold and windy and getting dark so we decided to setup our tents, make our way down to the beach for a couple of photos and head back to our small site in the trees. As the sun was getting lower, the fog got quite thick. We had a Snickers bar and a cup of tea for supper. And a tiny wee sip of scotch.

We woke to a chilly morning and decided to cram some food into ourselves since we didn’t have supper the night before. We had some oatmeal which tasted absolutely divine, and made some coffee with a pack french press. It too was tasty and well-needed. We packed up and headed out as we had a 20 kilometre hike in front of us to get back to the start.

The night before we decided to try and take the Eatonville Road back to the start of the loop. From Seal Cove it’s about a 6 kilometre hike to Eatonville where we stopped for a much needed lunch of chili macaroni with beef and tea. From there it was about a 14 kilometre hike back to the start. We were feeling pretty optimistic as the road is an easier hike than the trail through the woods. What we didn’t know of course is that the road makes a gradual climb up for about 7 kilometres before you get to the summit where it heads back down to the visitor’s centre. It wasn’t as bad as the hike of the day before, but we were still wondering what the heck was going on! But we pushed through, kept hiking, one foot in front of the other.

By late afternoon we found ourselves within sight of the visitor’s centre and the parking lot. The sun had come out to greet us, a beautiful warm finish to a long, exhausting three days. I was to tired, and frankly too bitter, to take any photos on the third day. Sorry! We changed into some clean clothes in the visitor’s centre, treated ourselves to a bottle of pop and headed back to Halifax. On the way back we stopped in Truro to eat a good hearty meal at Fletcher’s Restaurant. I had the hot turkey sandwich and tea, and it tasted fabulous.

So, when I got home and had a bit of time I took a shot of my boots. This is how I hiked for about 34 kilometres. Not nice.

For most people, the hike should be done in four days. You can do it in three, but you may not enjoy it as much. That’s my advice, and if you make your way around the trail, I hope your hike is a good one.