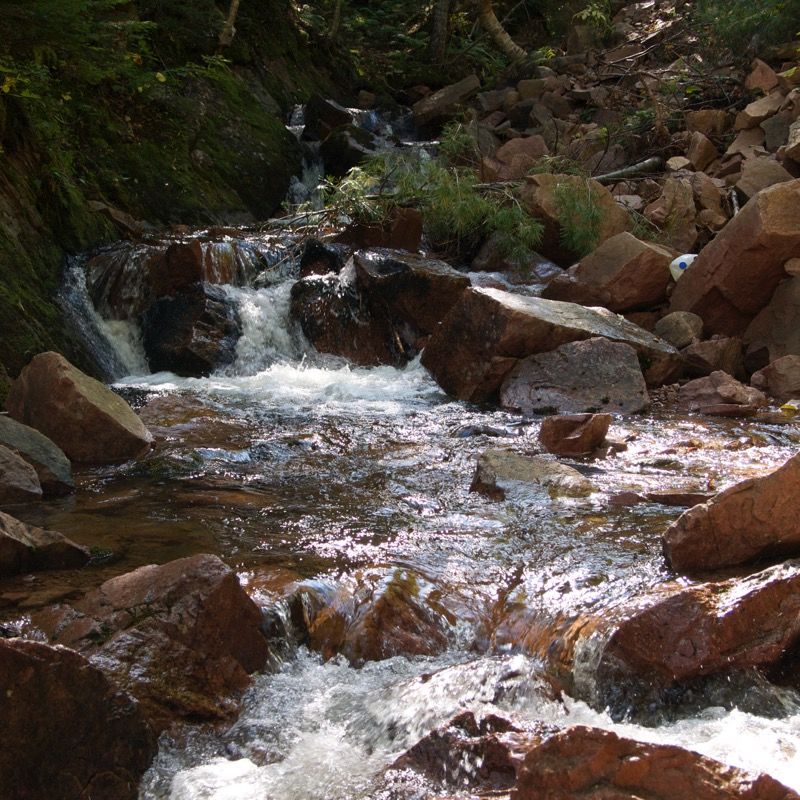 This summer had been a bit of a write-off weather-wise so I didn’t do nearly as much hiking as I’d hoped to. I got to do more bike riding for some strange reason but hiking is my first love when it comes to being outdoors so I was a little down about my lack of fun on the trail. So when a friend of mine suggested we hit Cape Breton for a couple of days of hiking over the Thanksgiving long weekend, I jumped at the chance. There’d also be a cottage for us to use so no camping required. Because if camping was involved there’d definitely would have been some sort of freak rain storm.

On the first day we decided to take it easy and do a short hike up along Cape Dauphin to what people call Fairy Hole. Since it’s been such a wet summer the water level was higher than normal at this time of year so we couldn’t get down to the beach like you could normally. It was a pleasant hike nonetheless, pretty easy and flat the whole way. The fun comes at the end when you have to use the provided rope to climb down to the water. Once down at the river, it’s a good spot for a few photos.

Since it was an easy hike we decided to take a walk over to the abandoned Cape Breton YMCA Youth camp a few properties over. I always enjoy a visit to creepy, delapitated buildings in the woods. It’s a bit of a shame this spot isn’t being used at the moment, but seeing how much work would need to be done I can understand. It looks like all the cabins would need to be torn down and rebuilt, not a cheap task. So, I took a pile of photos for the record. I love the graffiti on the walls of the cabins where the kids stayed over the years. I could look at these walls for hours. There were seven or eight cabins just like the one in the photo.

A bit later that evening the sun made a spectacular exit over the hills. Sunset photos are cliche, but I couldn’t resist, the light was just so beautiful.

The night was so beautiful we had a small campfire on the beach. The beer went down like water, the air was fresh, there were no bugs and the ever-present Cape Breton breeze even decided to take a break. Such a treat.

The next day we decided to do a more difficult hike and made our way over to Mabou on the west coast of the island to hike up through the highlands. We did a loop around MacKinnon’s Brook, up over the top of the mountain and back down again. This hike was a decent challenge as it gains some pretty decent elevation in a short time. This is a shot from about halfway up look down on the small village of Finlay Point:

The trail goes up and up and up. It was a warm day for October and we certainly worked up a sweat but it was all worth it. The views from the top are quite amazing. Unfortunately a section of the hike wanders through a clearcut, the shortsighted result of an American landowner. It allows for some nice views to the ocean but it looks like a war zone at the moment. Having worked in the forestry industry a clearcut doesn’t shock or enrage me like it does others, but having one along such a beautiful trail and for what I consider lame reasons (according to some locals he was scared of forest fires) I can’t really go along with it. Despite the industrial intrusion on the beautiful hillside, we made our way along the trail. We packed a lunch and decided to stop and eat on our way down, leaving the climbing behind us. One of my favourite things about hiking is the challenges of the terrain and overcoming them. I’m not an athlete, so these treks get me out and feeling better about whatever physical abilities I might possess.

We were hoping to have a bite to eat in Mabou at the Red Shoe Pub, run by the Rankin sisters but there was some music on and there was a seven dollar charge just to get inside. We decided against that and instead found a nice local spot down the road called The Mull to have supper in. A nice end to a warm day on the trail. We headed back to the cottage and relaxed for the rest of the night.

We had a great few days on the island hiking, exploring and relaxing. Cape Breton is a beautiful place and one I always enjoy visiting. Hopefully it wasn’t the last hike of the year!