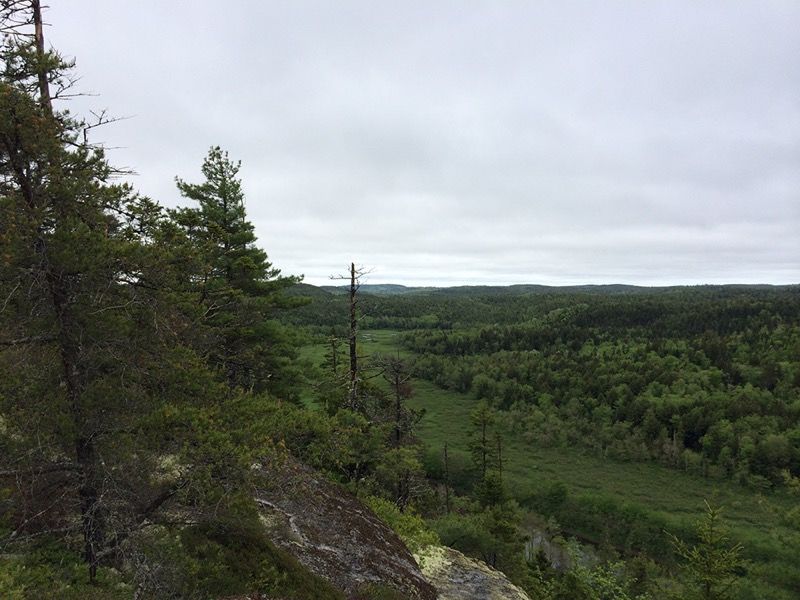 After a long and messy winter it was time to get back on the trails now that the weather has turned warmer and drier. It’s hard to believe that it’s been over six months since I’ve been out on the trail, but that’s the way it is sometimes. To start the hiking season off with a bang, my hiking partner and I decided to tackle one of the most challenging trails in the area, the North Granite Ridge Trail.

I’ve hiked the southern half of this system twice before and it was time to add the northern end of it to my list. Since I’ve basically been a couch potato for six months, why not start of with an 18 kilometre, punishing hike?

Instead of starting the trail at the official trailhead located one kilometre down the rail trail from the parking lot, we decided to start right away and added the Gibraltar Rock trail to the start. It begins right out of the parking lot and gives an indicator of how gruelling this trail is going to be. There’s no easing into it as the trail begins by going straight up the ridge face for what seems like forever but is only a few hundred metres. As a reward there is nice wide look off to take in the view below and catch your breath. We finished our coffee, snapped a couple of photos, took a deep breath and set off.

The trail is much like its southern companion, a series of ups and downs over its length. I found the first half of this trail to be quite nice, not too punishing and I thought to myself — I think the northern trail is easier than the southern trail — but I may have just being feeling confident and energetic. It isn’t long before the ups and downs begin wearing down the leg muscles that haven’t seen too much action over the winter.

As the trails goes up and down there are a series of lookoffs to stop and rest for a few minutes at. They provide a beautiful view of the river valley below and give the weary hiker a chance to gulp some water and perhaps snack on a cookie or treat. There are also quite a few geocaches along the way if you’re interested in those. I managed to find a few, but a few others seemed too well hidden for me, and frankly, I was a little tired to keep looking. Next time! We didn’t come across much wildlife, but we did manage to come across one of our native Eastern Green Snakes sunning itself along the trail, It didn’t seem to mind us too much.

The trail itself is well-marked and easy to follow. As you’d expect there are many, many rocks of all sizes, including those that look to be larger than my apartment. They are huge! There’s also a fresh, lush, green feeling about the trail this time of year as everything is exploding after the winter. I love this time of year if only for the bright green colour of the woods and the rushing streams.

Eventually, after a seemingly never-ending chain of hills and lookoffs there is one final climb through the woods to get to the last look off of the day at Longview. There’s a bench conveniently placed there with the message “Choose Happy” inscribed into it. At this point of the hike, yes, I was happy because I knew it was all downhill from there. Not to say that was free of leg and knee pain, but it was the last of the day. As we made our way down the hill you come to Kelly Junction, the spot where the north, south and downhill trails meet. From here it’s about 250 metres straight down to the rail trail and Norma’s Place, a perfectly placed picnic shelter.

After a quick lunch of cold cut sandwiches, homemade granola bars and hot apple cider on the picnic table it was time to start the final 7 kilometres along the flat, gravel rail trail back to the parking lot. As tired as we were, these last kilometres went by fairly quickly and painlessly. Before long we found ourselves back at the car, thankful to get our boots off and enjoy a treat of cold chocolate milk.

If you’re going to tackle this trail I suggest a good pair of boots as the ground can be challenging with many rocks, roots and wet areas. You should also bring lots of water, at least two litres, even more if it’s over 20 degrees. There are a few places along the trail to refill your water bottle if you need to, but bring a filter. As usual, I recorded a track of the hike. In total the Gibraltar Rock section was about a kilometre in length, the North Granite Ridge was around 10 kilometres and the rail trail back to the parking lot was 7 kilometres. Enjoy!