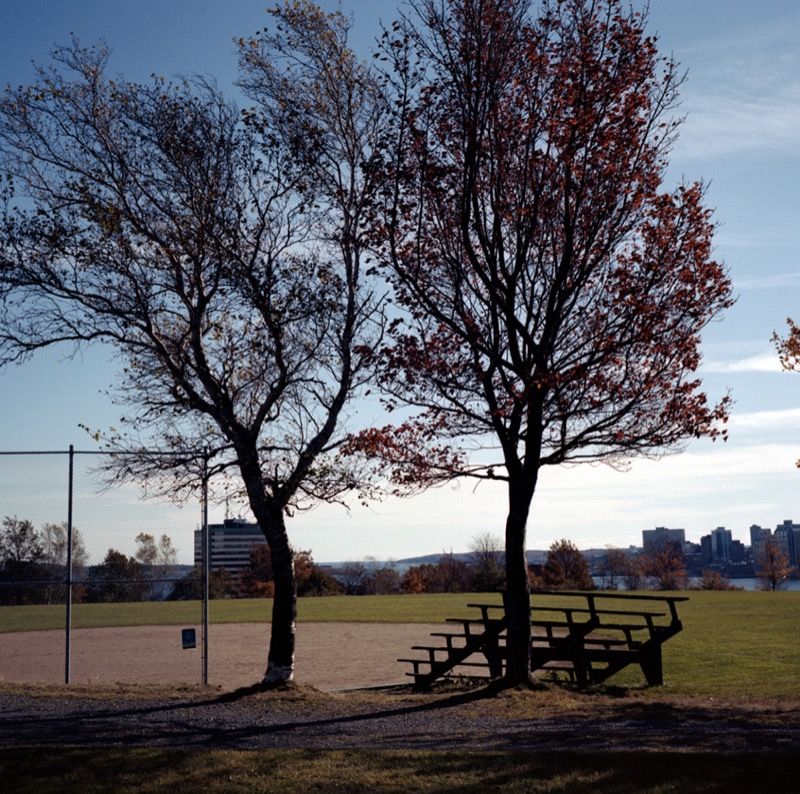 I’ve been developing my own black and white film for quite a while now so doing my own colour isn’t a huge leap. I had always heard rumours that “it’s way more difficult and labour-intensive without the forgiveness” when compared to doing your own black and white. Then I did some reading and found advice from more level-headed individuals that said it’s not at all more difficult. Plus, it’s fairly inexpensive. So I decided to order up some kits, twenty more rolls of film, and give it a go. There’s this misconception that because in the olden days of a few years ago it was all done by machine it must be impossible to do by hand at home. I keep having to remind people that before machines did and made everything for us, we did it ourselves, by hand. Besides, with the loss of Carsand-Mosher from downtown, Halifax — for me anyway — has become a boring, homogenous wasteland when it comes to photo service. As a film user I’m a damn pariah in these parts. But for the sake of reducing my carbon footprint, I’m not letting anyone send a friggin three-dollar roll of film to Montreal or Toronto to be run through a twenty minute process. Madness.

Before I go into my experiences with the DIY colour film experience, I should mention I don’t shoot much colour. I’m not a pro who has to shoot colour for client work and frankly 99.99999% of the photos taken on any given day are in colour so it’s not like the world is missing out by me not adding to it all. But the autumn is a special time of year and I find the light is purest. Not pure in a strength and length kind of way, more in a make things look beautiful with no effort at all kind of way. As far as I’m concerned, people can have all the summer light they want, just leave me the light from the other three seasons please. So this fall I decided to shoot as much colour film as I could and process it all myself, at home, in my tiny little apartment.

Starting in September, I moved the black-and-white to the back of the fridge and moved the colour film to the front. That in itself was a leap for me as the colour film is usually kept at the back, just in case I get the urge. Seeing the yellow boxes of Kodak Portra 160NC at the front instead of the green boxes of Fuji meant I was in for a change.

So I ordered a couple of C41 kits from Freestyle in Hollywood as I can’t seem to find anyone in Canada selling them. The kits I ordered are made by Unicolor, out of Michigan. They come in different sizes, mine were 1L kits, and in powdered form. The powder means it has decent storage life, and it can be shipped via normal channels without incurring a hazardous material fee. It’s quite cost-effective as well, I can do 8 rolls of film for $18.

I set aside a couple of hours on a rainy, miserable Saturday afternoon and got to work. I started out my mixing up the three chemicals needed to make it all happen: developer, blix and stabilizer. That’s it! The only sort of difficult part is keeping the developer and blix at a constant high temperature of 40 degrees Celsius. I have two steel sinks, so the left-side sink was a hot water bath to keep the bottles nice and cozy in. Mixing the chemicals themselves is simple, put 800mL of 40 degree water in a beaker, add the powder while stirring, mix until dissolved, top up to 1000mL, pour into a bottle and place in the bath. Done. Mixing the blix — that’s a compound word for bleach and fixer — is pretty much the same: fill a beaker with 800mL of 40 degree water, add part A of powder, stir, add part B powder (which causes an endothermic reaction, it gets a little fizzy), stir until dissolved, pour into bottle and place in the bath. Done. The stabilizer is the easiest as it’s done with room temperature water, 1000mL in a beaker, add the powder, stir until dissolved, pour into a bottle and set aside. Now the chemicals are mixed, it’s time to process some film.

Normally, I’m used to black and white developing taking anywhere from 11 to 18 minutes. C41 is all of three-and-a-half minutes. Then it’s on to the blix, which takes 6.5 minutes. Then a three minute wash, a minute in the stabilizer and presto! I can’t express how happy I was when I pulled the first two rolls from the tank. I never get tired of it even with the hundreds of rolls of black and white I’ve processed, but since this was my first time with colour, the rush was a little more intense. It just feels so magical and satisfying. And on I went. Seven rolls through the tank and hung to dry.

After a few hours of drying, I decided to scan a couple of rolls to get a good look. I am very, very happy with the results. So much so, I may be shooting more colour in the future. Here’s an example: