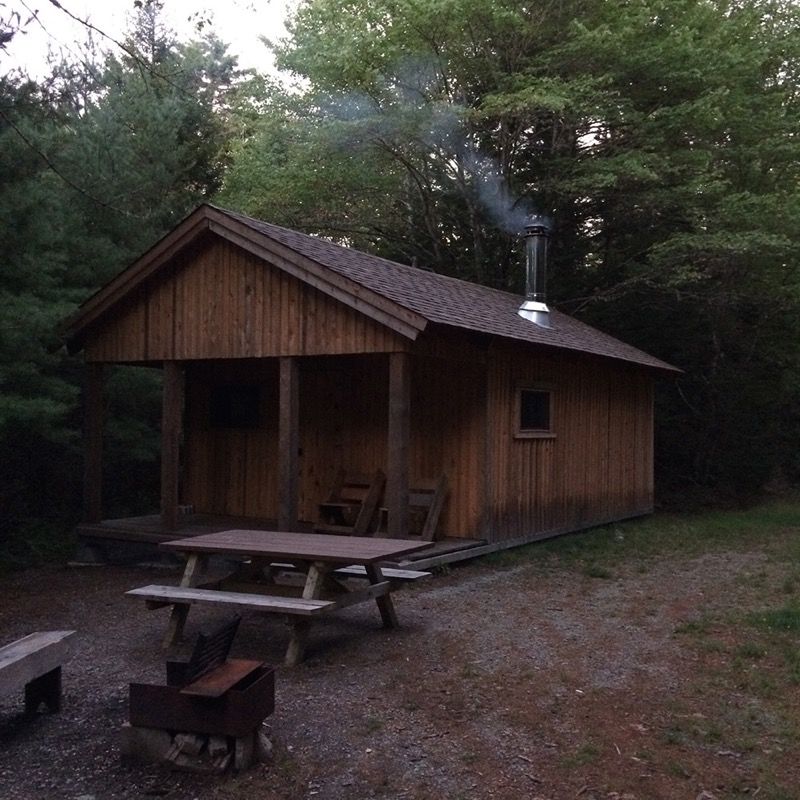 It’s been about three years or so since the Wil-Bo-Wil cabin was built in Kejimkujik’s backcountry, and even though I’ve passed it many times on hikes destined for elsewhere in the park I’ve never actually stayed there. I decided to remedy that situation by booking it for a couple of nights and doing a little luxurious late summer camping in one of my favourite places.

The cabin is a replica of an old hunting cabin that stood in the area long before it became a national park and is named after the three owners: Wilford, Boyd and William. This reconstruction was built by students of the Heritage Carpentry program of the Nova Scotia Community College. There’s a short interesting article of the build on NSCC’s website. I really like how the park has used this as a tool for learning and teaching, reaching back into the history of the area.

As with any respectable backcountry cabin, the Wil-Bo-Wil is pretty rustic, but having said that it’s much nicer to stay in than a tent, especially during the shoulder season when the nights get frosty and the ground a little more hard. There are four large bunks — a maximum of four adults can stay in the cabin — as well as a large wood stove, kitchen prep area, table and chairs. There is also a nice porch out front making it easy to still be outside even when it’s raining.

As with other backcountry sites the park supplies the firewood, but make sure to bring a small axe for making kindling to get your fire started. Once the fire is going in the stove it really adds to the cozy feeling of the cabin. I really wish there was winter access to this area of the park as the cabin would be a perfect destination on skis, and even though the cabin has been described as “drafty”, it’s not nearly as bad as you might think of a building with wood plank walls. Once the stove is going it’d make for a perfect winter retreat. I will always have fond memories of a couple of nights spent in the yurt that used to be located a couple of kilometres back down the trail.

I prefer to hike to the cabin but of course there is a very convenient trail leading to the shore of Peskowesk Lake so many people canoe in. In the evening the lake provides a perfectly quiet and still foreground to the setting sun. Who needs TV when you have water bugs, jumping fish and birds to entertain you? Once the sun goes down and the dark settles over the park the cabin is perfect for a game of cards or chess, both of which have been very generously donated to the cabin by previous travellers.

The hike into the cabin is a relatively short and easy 7 kilometres from the small parking lot at Eel Weir. I’m used to much longer distances when backpacking through Keji but I’ll take it. Since the trail in this area of the park is an old road you could also bike into the site. I’ve seen people rig up some pretty sweet bike trailers to carry their gear in. As mentioned above, you could also easily canoe to the cabin if water is your preferred surface.

If you’re looking for a fun backcountry experience without having to set up a tent, I highly recommend the Wil-Bo-Wil as an option. As someone in the cabin notebook wrote, it’s nickname should be The Keji Hilton. When the nights are cool and the weather unpredictable, it sure feels like a little bit of luxury in the backcountry!

As usual, there’s a map of the short hike to the cabin.