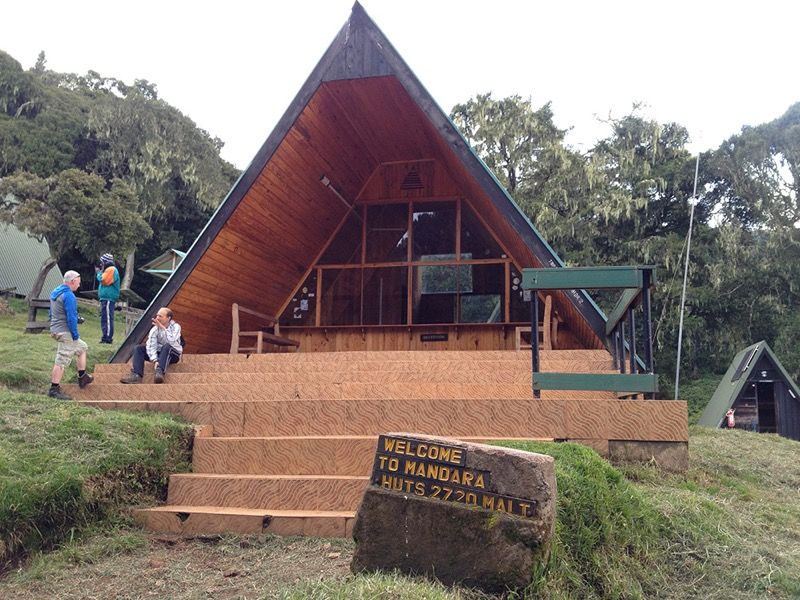 We decided to do the Marangu Route, otherwise known as the Coca-Cola Route. It’s a five day trek up and down the mountain, a timeframe that packs it all in pretty tight. Other routes typically take six days but also tend to be a little longer. The Marangu Route is about 70km round-trip with an altitude gain of about 1000 metres per day. I didn’t feel like it was a strenuous hike until the final ascent, mainly because we walked very slowly, or pole pole in Swahili. The point is to get to the summit, not run up the mountain so I was happy we took our time to get from camp to camp and allow our bodies to acclimatize properly while saving as much energy as possible for the last two days.

The first day is a nice, easy hike of about 7km to Mandara Hut, gaining about 900 metres in elevation to get to 2700 metres. Mandara Hut is the nicest on the route and while it was very quiet while we were there there were a few people who simply stayed the night and walked back to the trailhead. It was at this point we were introduced to the black and white Colobus monkeys that make the area their home. We met a fellow trekker from Chicago who was on a 12-month trip around the world. He has some very interesting stories.

Day two started early, around 7:30, as it is about a 12km hike up to the next hut. Again, the elevation gain was right around 1000 metres — getting us up to 3720 metres — but it didn’t feel like we were really hiking uphill because of our pace. This part of the trek moves from the thick forests of the first day to open moorland. The vegetation gets smaller and hardier and the landscape opens up all around you. It rained for about 30 minutes as we were getting close to the end of the day, luckily we had our rain coats in our day packs and stayed relatively dry. By the time we arrived at Horombo Hut the clouds and fog had surrounded the camp. There wasn’t much to see so it was an early night to bed. This was the sort of night I was glad we were sleeping in huts and not tents.

Up again early in the morning — around 6:30 to get going by 7:30 — we were greeted with a gorgeous sunrise. The fog had cleared and we found ourselves high above the cloud level. It was then I realized how high we were and just what I had gotten myself into. It was breathtaking in the best of ways. After taking a few photos and eating breakfast, we were on our way again. The third day leaves the moorland behind and moves into alpine desert. The vegetation turns to scrub and the landscape is moon-like in appearance with its rocks and dust. The long 12km trail stretches out before you and again, it’s all about the slow walk up to the third and final hut. As with all days, we did most of our hiking before we stopped for lunch. On this day we walked 8.5km before eating, leaving us with just 3.5km to get to Kibo Hut.

We arrived at Kibo Hut at around 2:30 in the afternoon, much earlier than groups usually get there. It started snowing about 10 minutes after we arrived, quite a difference from just two days before when it was well over 30 degrees Celsius, but it was over 4700 metres in elevation so it made sense. We wanted to get to Kibo Hut as early as possible so we could get a quick nap before our early supper. After hiking 12km on the third day we were to get a few hours sleep after supper and get woken up around 11PM or so to get ready for our overnight ascent to the summit. We were already pretty tired after hiking for three days so we wanted to get to sleep as quickly as possible. Trouble is you’re full of nervous energy and anticipation for the ascent, making it difficult to sleep. I managed to get a few hours but I really could have used a few more.

After eating a small breakfast — at 11:30PM! — we put on our warmest clothes, laced up our boots, put on our day packs and headlamps and made our way outside. There we stood in the pitch black darkness with only our small headlamps to light our way. We would spend the next six hours putting one foot in front of the other, slowly, slowly making our way upwards, criss-crossing the steep mountainside to get to the first stop, Gilman’s Point at 5685 metres. It seemed to take forever to get there, and I won’t lie, I shed a few tears when we got there. They say if you can make it to Gilman’s Point, you can make it all the way to the summit. At this point though, I wan’t so sure. I was exhausted, I can honestly say I’ve never been more tired than I did at that point.

It was still dark when we reached Gilman’s Point and all I wanted was for the sun to rise so we could see how high we were, how far we had come and warm up just a little bit. It took all the energy I had left and the convincing of our guide to get me to get up off the rock I was happily sitting on. The next point is Stella Point, halfway to the peak. It was a goal to walk toward and I knew once I got there I could sit again, breathe deeply and rest a little. Once we were at Stella Point the sun had come up and the warmth gave me that little tiny bit of energy I needed to keep going. You can also see the sign at the peak from this point, giving something to walk toward.

Up again for the last time, up toward the peak. Around a large rocky point and there it was, Uhuru Peak. Again the tears came. There I was, at 7:45AM, on the roof of Africa at 5895 metres. That’s almost six kilometres closer to the sun than I am at home in Halifax at sea level. I made it, I couldn’t believe it. It took everything I had to get there. We were lucky to be on the trek during low season, we had the top to ourselves. After fifteen minutes of taking in the summit, taking photos and high-fiving each other, it was time to head back down again.

Going down is pretty damn difficult, too. Your legs just want it all to be over and by this time the mountainside has thawed turning to gravel. You basically go straight down, practically skiing the way back down to Kibo Hut. Our guide gave us an hour to nap and have some lunch before setting off again for the 12km hike back down to Horombo Hut where we stayed the night. That’s right, we hiked 30km in two days with an overnight ascent of the tallest freestanding mountain in the world tossed in the middle for good measure. Damn I was tired. We were also heading downhill toward a hot shower and cold beer back at the hotel and that was all the incentive I needed to keep going.

So that was my trek up and down Mount Kilimanjaro. I have lots more to tell, but I’ll end it here. I received an official certificate from the National Park that I have framed and displayed proudly on the wall of my apartment. I have a photo of me on the roof of Africa, for a short moment I felt like a king. Our trek went flawlessly. Our guide Silvano was excellent, we couldn’t have done it without him and our assistant guide Dula. They had our safety and enjoyment as their utmost concern the entire way. The porters, cook and waiter all had such great attitudes, we couldn’t help but feel uplifted by them and their incredibly hard work. I am very happy I went with G Adventures, my first trip with them. They exceeded my expectations.

If you’re looking for a trip of a lifetime with a lot of hard work and a summit view, this should be on the top of your list.

You can read part one to learn about the non-trek part of the trip. I also took my GPS with me on the trek recording as we hiked.