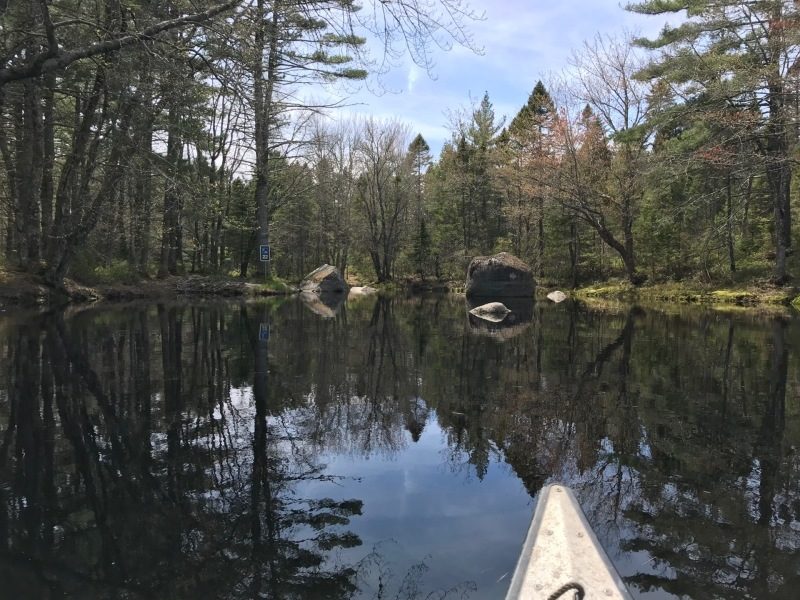 After taking last year off from our (mostly) annual tradition, three friends and I jumped back into a couple of canoes and headed into the backcountry of Kejimkujik National Park for the Victoria Day long weekend. This time we were headed for Site 22, the last site on the West River. The weather was sunny and warm, the winds light. Perfect conditions, except for the flies which seemed to have exploded into life. Nothing a good bug net over you hat and some spray can’t solve.

We headed to the park early as we wanted to make sure we weren’t trapped in any lineups and kept waiting. Last year’s free park passes seems to have reinvigorated people’s interest in getting outside — a good thing — but we’ve become accustomed to just showing up at Keji and being some of the very few people there. After getting our annual park passes and backcountry permits we made our way to the launch. Since the weather was so nice we decided to forgo any portaging and just head straight across the lake from Jake’s Landing where there was lots of room to leave our cars parked for the weekend. After unloading the canoes from our cars and loading them with our provisions — including a cast-iron dutch oven! — we set off.

After leaving the mouth of the Mersey River and the craziness of the canoe/kayak rental area behind, it’s back to what we come to Keji for: big open skies, clear water and incredible quiet. It doesn’t take long before you become what feels like the last humans on earth. Just the rhythm of paddle into water, stroke, paddle out. After about 7km of fairly easy paddling we found ourselves across the lake at the mouth of the West River. You really need to know where you’re going and how to navigate on open water as many of the destinations can be hidden behind islands or large shallow grassy areas. This was the case with us as we needed to literally paddle right up to the mouth of the river to see it.

Once on the river, the water became even quieter. In contrast to the huge expanse of open water on the lake, the river’s flat, dark water quietly surrounded and welcomed us. As easy as it might be to ease up, this isn’t a t time to get too relaxed. Under that dark water can lurk huge rocks, ready and waiting to jolt you back into action. Depending on what time of the year it is these rocks can be well under the surface or protruding well above. The West River flows into Keji lake so we were paddling upstream, luckily it wasn’t against fast moving current.

After another 4km of paddling — and passing site 21 — we arrived at our destination, site 22. It’s hard to miss with giant rocks rising up out of the water forcing you to slow down as you come around a slight bend in the river. We pulled our canoes up onto shore, unloaded our gear and began setting up camp. The bugs were a little crazy but the sun was shining and we were happy to be far away from civilization. After setting up camp we set to getting ready for supper by getting a fire going, filtering some water and cracking a can of local craft beer. We put the dutch oven to work making a large batch of chilli which we polished off along with some naan bread warmed over the fire. Amazing! We certainly don’t starve on these trips where we can bring a bit more with us in the canoe instead of having to carry everything on our backs.

With bellies full of food and a nice fire, the evening turned into night. Fighting to stay awake, the fresh air and beer won. We all headed to our tents for some well-needed rest and as soon as our heads hit our pillows, the rain started. It would be torrential but we were warm and dry. It sure made falling asleep easy.

The rain came down all night, without pause. After sunrise and lying in our tents more than a little longer than normal, the rain clouds started to slowly move away. It would take most of the day for them to completely leave but we managed to get a fire going and a breakfast of pancakes and bacon with coffee made. It wasn’t all bad. With our rain gear on we managed to stay mostly dry during the showers. A couple of us decided to go for a hike on the trail that connects site 22 with the Liberty Lake Loop trail, something to explore. This is a trail that doesn’t see much use over the year and it hasn’t been maintained in a few years it looks like.

The first bridge encountered is slightly wonky with a few broken planks. It is very slippery when wet and with no handrails, it took all our balance to keep from simple sliding into the river. The trail isn’t marked too well in a lot of places but thankfully the path itself is fairly easy to follow. That is until you get that perfect storm mixture of fallen trees over the trail and a lack of markers. Here’s a tip for you hikers: when moving around obstacles over the trail, always go up one side and back down the other until getting back to the trail again. If we had followed this advice we would have saved ourselves half an hour looking for the trail on the other side of the downed trees. I like to chalk it up to having a damp brain or not enough coffee that morning.

Back on our way we continued along for another 450 metres until we found ourselves at the second bridge, much more sturdy and safe crossing than the first. The hill down to the river is a little steep so there is a conveniently placed rope to hang on to if you find your feet sliding underneath you. The rope itself has spent a few too many seasons on the sun so it’s a little, uh, prickly, but it does the job. Once down on the bridge we took a few photos and noticed what looked like bear claw marks on the handrails and a large chunk taken out of one. It wouldn’t surprise me as we saw quite a bit of evidence of bear activity between all the scat and digging.

After resting for a few minutes we decided to turn around and head back to camp. That was enough adventure and exploring for a wet, rainy afternoon. At least our rain pants kept the ticks away! We hiked our way back to camp, always a faster walk than the one out. Before long we could smell smoke from the fire and we were back after a 5.5km wander.

It was my turn to make supper so I set to getting the ingredients prepared for my Big Piney Stew. It’s a perfect recipe for making in a cast-iron dutch oven over a campfire with that little bit of smokiness really adding something special to the stew. With beef, carrots, potatoes and beans in a thick tomato sauce, it really hits the spot in the woods. Combined with a lukewarm beer it warmed us up and filled our bellies.

After a few hours by the campfire our eyes struggled to stay open and we headed to our tents for the night. Tomorrow would be back to warmth and sun for our paddle out.

We awoke to glorious sunshine and warm temperatures, something we had been hoping for. We got a fire going for breakfast and our pack stoves for coffee. We hoped the warm sun would help to dry our tents while we cooked and ate, but instead of being wet with rain they were wet with condensation. Oh well, nothing to be worried over, just means spreading out everything at home and letting it all dry out. So after a feed of eggs, bacon and cheese in pita wraps we started to dismantle our little camp.

We made fairly short work of getting everything into our packs, our tents rolled up and our tarp taken down. I think the idea of a hot shower back home was pushing us to move a little quicker. We hit the water and made a slightly more direct line across Keji Lake than we did coming in. That ended up shaving almost 500 metres off our paddle and we made it back to Jake’s Landing fairly quickly. We also made short work of unloading the canoes and getting them onto the cars for the trip home.

On our way out we stopped into the Visitor Centre to give them some information on the trail condition and to of course peruse the By the Mersey Gift Shop run by the Friends of Keji. I always like to pick something up to support the Association and the park itself, plus I get a cool souvenir to take home with me and show off.

Once again our trip into the backcountry was another successful visit to Keji. I already have a couple of other trips planned there later in the summer, can’t wait!