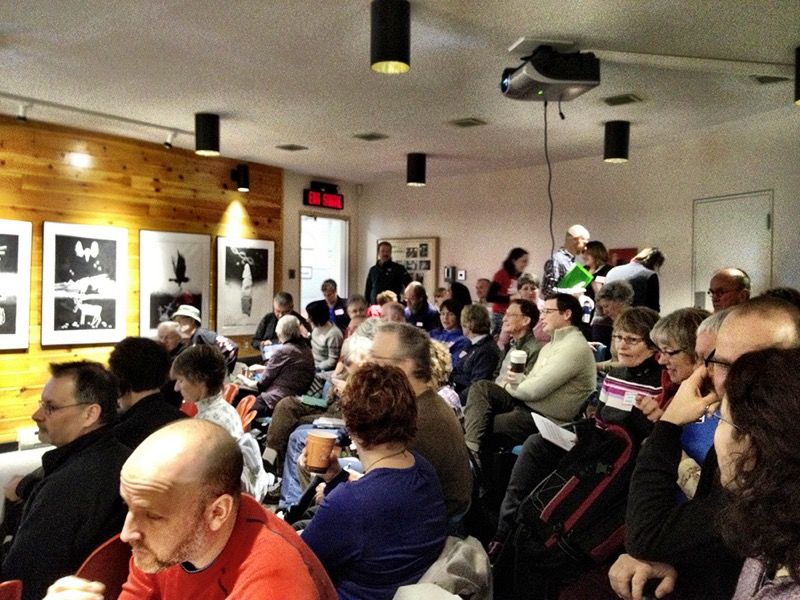 On Saturday January 28th, 2012 I attended the first ever Hike Nova Scotia Hiking and Snowshoeing Summit. I’ve been a member of Hike Nova Scotia for a couple of years now and thought it’d be fun to attend and meet others who share my love of hiking and just generally like to be outside. On top of that, the summit was held at Kejimkujik National Park and National Historic Site, one of my favourite parks in the province.

The idea of the summit was: The summit is a celebration of Nova Scotia’s hiking culture, which includes sharing best practices, stories and networking opportunities. It will help us grow a hiking, walking and showshoeing culture in the province. The summit is part of Take the Roof Off Winter.

There was a full day agenda and the summit was sold out. The small presentation theatre at the Keji Visitor Centre was full to capacity with presenters and attendees. There was a good vibe in the room and most spent a few minutes before the summit started getting to know others.

First up after the introductions from Hike Nova Scotia President Deb Ryan was a dual presentation on long-distance hiking trails. Jim Vance talked about the International Appalachian Trail, an international and intercontinental trail over 3000 kilometres in length, including 465 kilometres in Nova Scotia.

Norris Whiston from the Cobequid Eco-Trails Society then discussed the building of the Cape to Cape Trail, a dream of long-distance hikers in Nova Scotia. Running from Cape Chignecto to Cape George the Cape to Cape Trail is a massive challenge to build 400 kilometres of trail, most, if not all, by volunteers. Norris is a passionate supporter of this project, you could tell by his energy when presenting and discussing the work that has both been completed and is still to come. Can’t wait to hear more about this project and to get on the trail!

Next up was Andrew from Kejimkujik National Park and National Historic Site to discuss both the adventures to be found at Keji and the challenges the park faces. It’s no secret that park visitation numbers have been dropping steadily over the last decade. One set of numbers showed visits down 25% since 2001. That is staggering, and a major challenge to park employees, Parks Canada and the Government of Canada. Andrew discussed some plans and ideas currently being tested, such as the two yurts available in the backcountry. For many people in urban areas, the idea of sleeping in a tent isn’t terribly attractive. Putting a fixed roof over people’s heads is proving to be a popular way to get people, including families, back into the park. I can attest to the popularity of the yurts as I was unable to reserve one over a weekend all winter long! That’s a great story but it’s only a start. Losing our parks to a lack of interest strikes at the heart of our notion of what it means to be Canadian, our love of nature and wilderness. Get out there and visit your parks!

After Andrew’s presentation — which I didn’t want to end because I LOVE Parks Canada — we had a pecha kucha with four people talking about tales from the trail. Pecha kucha is a presentation format involving 20 slides for 20 seconds each. It’s a fun, dynamic way of presenting information. Pure content, no tangents. For this set, the four presenters were: Don Crowell from Scotian Hiker, Gordon Warnica from Hike Nova Scotia, Nancy Parsons from the Chebucto Hiking Club and Ben Parsons, who I believe works at Mountain Equipment Co-op. All had fun, engaging stories to tell the crowd.

At this point it was time for lunch and a stretch. Lunch was served a quick walk down the road at the Mill Falls picnic shelter. It was a beautiful day and a perfect opportunity for a short walk down the road.

The lunch was just what we needed, some homemade soup, a sandwich and some sweet treats, all in the warmth of a wood stove heated shelter. It was a bit crowded, but that just meant people had to get to know each other while squeezing into a spot on a picnic table.

On the way back we decided to take the slightly icy trail through the woods back to the visitor centre. It was worth it though as the river was looking cold and dark and the falls were crashing.

The summit keynote was given by Michael Haynes, author of Hiking Trails of Nova Scotia among many others. He really is the expert when it comes to trails and hiking in Nova Scotia. Michael chose to talk about the current state and future growth of trails in Nova Scotia.

After introducing himself, how he got his start in hiking and why he started writing about hiking trails, Michael discussed the current state of trails in Nova Scotia. If there’s anyone who has the authority to make these judgements, it’s this guy. He’s hiked many hundreds of kilometres of trail in the province, and done it ten years apart. He’s seen how things have changed. Overall, Michael believes the state of trails in the province is pretty good. There’s been a huge increase in the number and length of managed trails, an increase in trail-making skills and support from government at all levels.

In contrast to this good news, Michael mentioned how many trails over the past 10 years have been closed or have fallen into a state of dangerous disrepair. There are counties in the province where there are no trails under development and many new trails are old rail lines only. Spending a huge amount of time on the trails last summer to research the new edition of his book, Michael met very few Nova Scotians on longer backcountry trails. The vast majority of hikers on these trails were from out of province. He believes that Nova Scotia could be a premier hiking destination for eastern North America, but there is a distinct lack of a walking culture in the province. This has to change if hiking/walking in Nova Scotia is to progress. His passion for exploring by foot translated into a wonderful keynote, and the assembled crowd thanked him with a standing ovation.

After his keynote, Hike Nova Scotia president Deb Ryan presented Michael with a well-deserved honourary lifetime achievement award for all the work he’s done in the name of hiking in Nova Scotia.

It was a great moderated discussion on a few key topics pertaining to hiking and trail development in the province. Panel members were well-spoken and straightforward. I got no indication they were speaking the company line and in fact, were more than happy to provide advice to the group and Hike Nova Scotia on becoming more vocal advocates for hiking and walking in the province. I’m very happy that this panel was assembled and took the time to speak.

We then took a quick break and reassembled for a second pecha kucha session. This time the topic was Stories From the Trail. John Glynn-Morris talked about hiking in Patagonia; Michael Haynes discussed his favourite hikes — and he’s hiked them all — which is a lot like a top ten list, different for each person; Etienne Randonnee gave a spirited talk on hiking off-trail; and Devon Peavoy put together a montage of hiking photos submitted by members, and those in attendance had to talk for 20 seconds if their photo came up. A great idea!

For those interested, here are Michael’s favourite hikes in the province in no particular order:

The final presentation of the day was put on by Garnet MacLaughlin from Cobequid Trail Consulting. Garnet gave a talk so full of passion on trail building and youth.

Garnet loves what he does, there is no doubt about that. You could feel his emotion rising as he discussed a project in Truro involving getting kids out to help build trails. Getting kids, private landholders, schools and municipalities involved in these projects is what it takes to get these trails built and maintained. The stories Garnet told the crowd were filled with hope and positivity. He really put a great exclamation point on a day full of opinions, stories and thought.

As the sun was beginning to set over the trees, casting a beautiful, clear glow over the park, it was time to head back to the city. It’s never easy leaving Keji, it really is a beautiful and special place. My mind was full of new information though and the day could be considered nothing but a complete success. The Hike NS executive, volunteers and Parks Canada staff all worked hard to put on a great summit and it showed. I was excited to be a part of this first annual event and look forward to being a part of many more.

Are you interested in hiking/walking in Nova Scotia? A membership to Hike Nova Scotia goes a long way to wearing your love of the trail with pride. The greater the numbers that Hike Nova Scotia represents, the more effective the group can be. Let’s get a culture of walking deep into a province that already has such a proud culture.