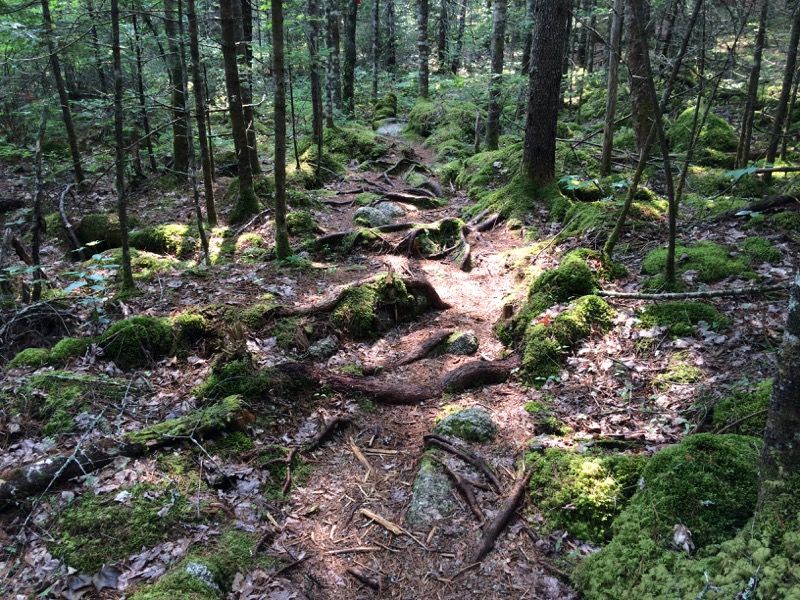 It’s been another fairly quiet summer when it comes to hiking. I haven’t been completely lazy though as I’ve been helping a friend build a rustic cabin on some family property. While building a cabin is fun and difficult work it’s not quite like getting out on the trail and exploring. So with that, this past weekend a friend and I decided to head back out to the Crowbar Lake trail, a short drive from the city.

This was the third or fourth time getting out there, the last time was in the winter, very different weather-wise than this time as the temperature was hovering just under 30 degrees with a decent amount of humidity. No worries though as my pack was filled with water and we had planned for a leisurely pace.

The trail itself is a decent challenge for those looking to get out into the backcountry a little. It starts going up and continues that way for much of the first half of the hike. There are some well-placed flat sections to keep your legs from screaming out loud, but for the most part the first few hours are a nice climb up to West Lake. There are a few nice lookoffs along the way to stop and catch your breath and maybe take a photo or two.

Once you get up to the West Lake loop there are a few more ups, downs and flat sections while you walk close to the shore of the lake. This section looks to be far less travelled than the sections closer to the parking lot. The vegetation is almost shoulder high in some spots, but the trail is fairly well marked and if you’re not scared of blasting through plants for hundreds of metres at a time, you’ll be fine. I sure wouldn’t want to be going through here during tick and mosquito season. Thankfully by this time there were no ticks and very few mosquitoes to fight with. I always prefer not to hike while being covered in bug spray.

The hike is about 13.5km and took about 6.5 hours all the way around, including the 20 minutes or so we took for a rest at lunch at about the 7 kilometre mark. I went through over 2 litres of water, but that’s probably because it was so warm and humid. I also had my water filter with me just in case but there aren’t any decent water spots along the trail to fill up. There’s one OK spot at about the 8km mark along the West Lake loop part of the trail, for the most part the water is dark and stagnant.

The good thing about this trail is that it is looped, meaning you can take one of the forks back around if you suddenly don’t feel up to it. We saw a few people near the start of the trail but after that, there was no one. As for wildlife, there were a few chipmunks, the usual chorus of birds and a single, small brown snake. There are also tons of stones and boulders all along the trail, some of which are larger than a car.

If you’re looking for a fun, quiet trail to spend a day on, and you’re in or around Halifax, this is a great hike to get out and around and put some mileage on those boots. As usual, I created a map of the hike with my GPS.