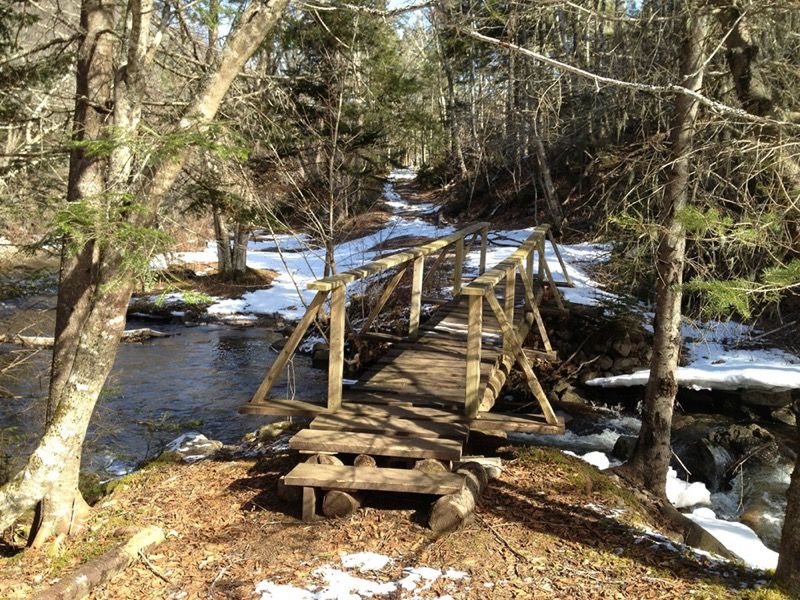 The Black Rock Community Trails are a set of trails located in the small community of Black Rock, NS, a short drive north of Berwick, off exit 15 of Highway 101 close to the Bay of Fundy. A friend and I decided to make the drive from the city and try out the longest of the trails. It was a sunny morning as we left the city and got on the highway toward the valley.

I should note that if you’re planning on hiking these trails, do not follow the maps you can find online in a few places. They are out-of-date, unreliable and do not reflect the location of the trails, especially the yellow trail. There are a few trails in the system: Pink, Blue and Yellow. I can’t speak to the trail going down to the Bay of Fundy, but the Yellow trail has been re-routed to the east of the road (named Wall St on Google Earth and topographic maps) and does not loop back to the Orange-Blue trail as it does on some maps found online. I haven’t seen a correct map on the web, but the large painted map at the trailhead looks like it has been updated. Be careful! As an example, the map currently on the Government of Nova Scotia’s website (as of March 2013) is wrong.

Judging by the snow on the trail it looked as though there hadn’t been anyone on the trail in a few weeks. There wasn’t too much snow left so the trail was easy to follow and walk on. There are a few spots where you have to cross a small stream, be prepared to get your feet wet in the spring and fall when the water may be higher. The trail is, for the most part, well marked. If you’re thinking of doing the pink and blue trails I think you’ll be alright. If you’re attempting the yellow trail, be aware that at the southeast end of the loop the trail now makes its way northeast along Dooley Brook, away from the trailhead at the parking lot. You’ll end up back up at the north end of the yellow loop, on the Bay of Fundy. By the look of the old maps, this will add a few kilometres to your hike if you’re not expecting it as you’ll have to hike back down to the trailhead.

As we had a copy of the old map, we were completely confused as to where to go when we reached the southeast end of the yellow trail. There is now a “Trail Closed” sign where the trail leaves the old road and goes back into the woods. We started up the new trail but since it hadn’t been well used it was difficult to follow. So with old map in hand we decided to head back and try the old trail as it was heading the direction we wanted to go to get back to the trailhead and was still marked. This wasn’t a great idea either, as it eventually comes to a small, active logging operation. From there, we decided to head up another old road to see if we could hook back up to the orange trail that appears on the old map but does’t appear on the large trailhead map. Very confusing. It was a good thing I had my GPS with me and was tracking our hike. We quickly came to the end of the old road and decided to head through the woods, over a small stream, up a hill and back to the trail we had walked a few hours before.

The lesson here is that you should always carry a compass, a GPS if you have one, and a good map as well as matches, water and food. You never know when you’ll need them. Without the GPS, we would have been walking around with very little idea as to where to head, especially since the map we had was next to useless. Learn how to use your gear!

In the end it was a decent day in the woods with a little bit of adventure. On the drive back we tried to find a pub to have a St. Patrick’s Day drink and a bite to eat but they were all jammed. So back to the city we headed, with only slightly bruised egos. At least we didn’t need Search and Rescue to come find us!